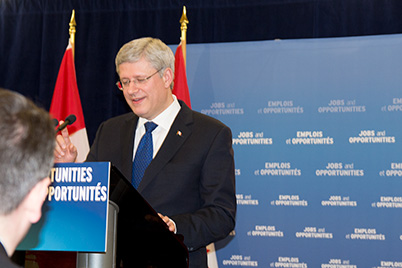 Prime Minister Stephen Harper was in Gormley today at the Whitchurch-Stouffville Museum to announce the New Building Canada Fund, which will provide $14 billion in funding for infrastructure projects.

"I am delighted to announce that the framework of our New Building Canada Plan is complete, and as a result provinces, territories and municipalities will now have unprecedented access to predictable, sustainable, federal infrastructure funds - for a decade," said Harper.

Overall the New Building Canada Funds will be divided into two areas.

Provinces and territories will have access to $10 billion, which includes the $1 billion earmarked for smaller communities and $9 billion for regional and national projects. Another $4 billion will be available for projects that meet federal priorities on the basis of their merit.

"Okay the name may not be original," said Harper as he joked with attendees and the media, "but the money - $70 billion dollars if we count our own federal infrastructure investments - is new, or at least almost all of it is new."

The Prime Minister also fielded questions from the media on several topics, including the recent conflict over whether to go ahead with the proposed income-splitting promise.