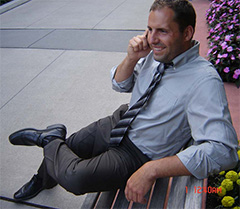 Joining Altmann as councillors will be Ken Ferdinands in Ward 1 (re-elected), Maurice Smith in Ward 2, Hugo Kroon in Ward 3, Rick Upton in Ward 4, Iain Lovatt in Ward 5 and Rob Hargrave (re-elected) in Ward 6.

This election saw a high voter turnout, with 59.02% of eligible voters casting a ballot.

The tightest race of the election was for the position of mayor, which saw Altmann and opponent Phil Bannon bounce the lead back and forth with Altmann finally claiming victory.

Meanwhile Rick Upton had the narrowest victory, claiming just 35.26% of the votes, perhaps in part due to his controversial Facebook post that proclaimed that no woman would ever truly be satisfied because no man would ever have a chocolate penis that ejaculated money. (Enough said, he certainly didn't have our support.)

Hugo Kroon handily won his seat in the Ward 3 riding, after a narrow defeat in 2010 and Iain Lovatt edged out close competitor Mike Humphreys in Ward 5 to claim his seat.

It will be an interesting time ahead, as the Town sees a new mayor and four new councillors take over to run the Whitchurch-Stouffville. We hope that everyone elected is up to the significant job of making vital decisions on behalf of the people who elected you.